skip to main | skip to sidebar

Things Go Bump in the Night at Haunted Henricus Park


Henricus Historical Park is endeavoring to find the original site of the Citie of Henricus. An early theory was that the original site—as it probably stood at the narrow part of the land in the curve of the James River at Dutch Gap—was probably demolished in the digging of the Dutch Gap Canal by Union General Benjamin Butler during the Civil War in 1864. Other theories included the thought that the site stood at a different spot or near a different bend in the river. Several test pits were dug over the Park more than 10 years ago, but yielded very little.  Our current archaeological work is due to an extensive look at maps and existing records that indicate that the original site of the fort itself might still be present, but perhaps buried deep beneath the soil that was excavated during the digging of the Dutch Gap Canal — under the present location of Henricus Historical Park.
Work began about four years ago and has grown to include GPR (Ground Penetrating Radar) testing to locate building walls underneath the soil; test trials to locate these have begun.  A partnership with Longwood University’s Department of Anthropology is ongoing.
So far, early GPR readings have hinted at potential walls located deep beneath the surface.  Test pits have so far revealed only mixed era materials of both early Virginia Indian and possibly of late colonial era and of Civil War materials.  Nothing yet has been found “in situ” or in its original place.

Why are we looking for the Citie of Henricus?  Its place in early American history is an important one.  It was possibly the site of much of what happened with early American government, economic development, of Indian and English interactions and by important figures in history – Pocahontas, Powhatan, Sir Thomas Dale, Alexander Whitaker.  Being able to pinpoint its original location will help to firm up its existence and its importance – to add to the history of the Age of Exploration and the development of the American experience.
Today, we our continuing our search for Henricus; we also provide public education regarding Archaeology: our Archaeology Spring Break Camp, our middle school program People in Environment, our inclusion of the archaeological method in our teacher training sessions on primary sources and through our yearly Archaeology Lectures.  Currently, three staff members, including a trained Field Archaeologist, are leading this joint effort with Longwood University. 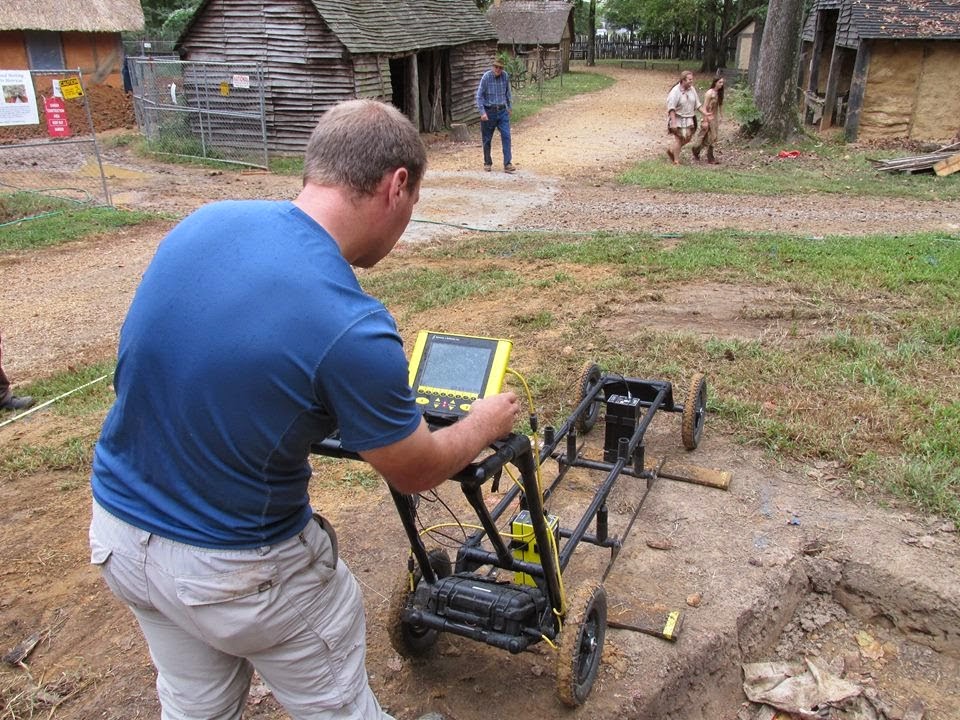 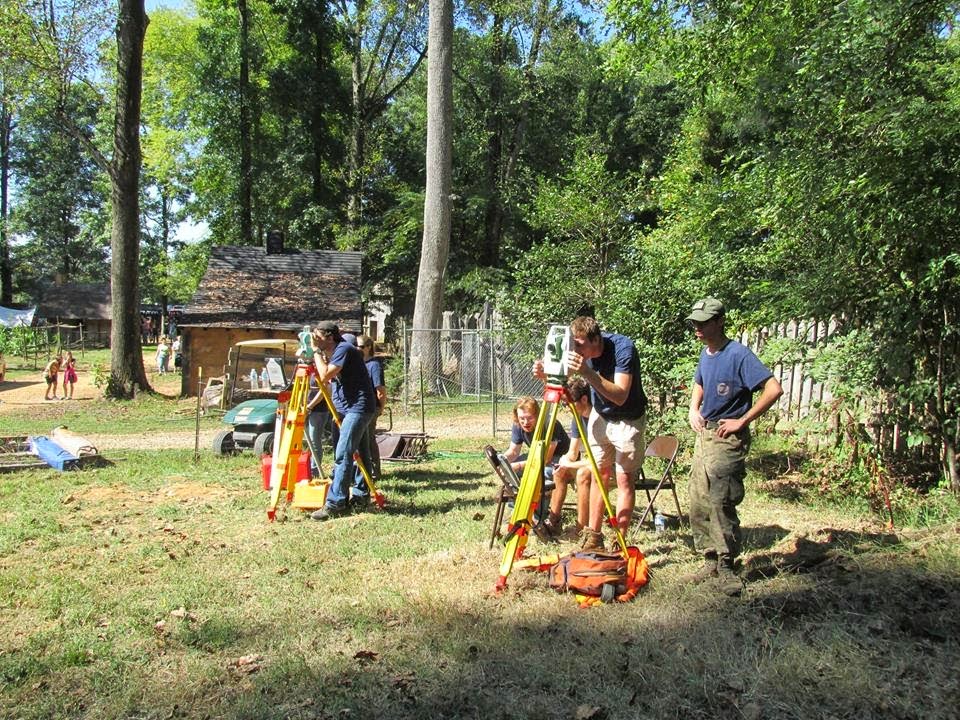 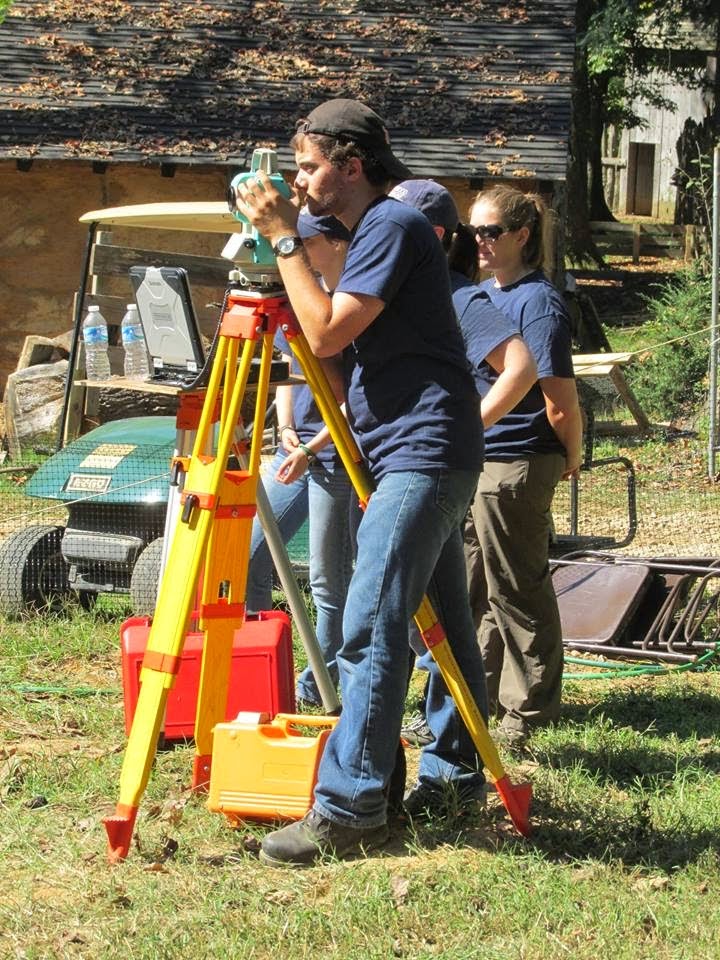 Posted by Henricus Historical Park at 9:16 AM No comments:

Henricus Historical Park is honored to have been selected for a virtual tour of the living-history museum for the Gilder Lehrman Institute of American History.  The video will be used for a 2015 online graduate course for history educators across the United States. One of the spring offerings, “The South in American History,” will be led by University of Richmond president and historian Edward L. Ayers, Ph.D.  A variety of short video field trips will showcase significant sites that evoke the rich and varied history of the region. Henricus his thrilled to have been selected to participate in this prestigious program.

On Friday, September 20, Henricus Historical Park welcomed Godspeed from Jamestown Settlement for Publick Days and recognized the first class of Emeritus Board Members of the Henricus Foundation. Honored for their service in founding Henricus Historical Park were J.E. Causey Davis, The Honorable Ernest P. Gates, C. Hobson Goddin, Dr. Dennis A.J. Morey, Kenneth M. Perry, John K. Taylor and Pauline A. Mitchell.  Music and dinner were enjoyed at the event where George P. Emerson, Jr. and J. Fletcher Kelly served as Masters of Ceremonies. Representatives from BB&T, lead sponsor for Publick Days, were recognized and thanked for their generous contributions. 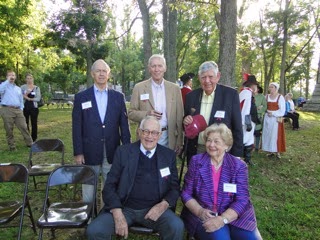 Posted by Henricus Historical Park at 2:07 PM No comments:

Bring History to Life by Volunteering at Henricus Historical Park

At Henricus Historical Park, we appreciate our volunteers!

Henricus volunteers play an essential role in inspiring and engaging people across our region, and we are always on the lookout for dynamic and energetic people who want to be a part of our team.

Volunteers help greet and orient museum visitors, assist historical interpreters in the living history areas, serve customers in the gift shop, provide support for special events, help with administration, and work behind the scenes in many other ways.

Gardens & Horticulture
Lend us your green thumb! Henricus nurtures plants in a greenhouse and across our 32-acre site in Virginia Indian, kitchen, physic and flower gardens. If you love plants, this is the opportunity for you!

1611 English Citie & Virginia Indian Site
Step back in time and assist our living historians and educators by demonstrating Virginia life in the 17th-century. Our volunteers are highly trained and enjoy a special camaraderie with our full-time staff.

Animals & Habitats
Goats, chickens and a pig reside at Henricus and all of them need love and attention.  If your calling is with animals, please help our staff care for them and share their unique stories with our guests.

Visitor Center & Gift Shop
Visitor center docents are the first and best source of information for our guests. Greeters introduce all that Henricus Historical Park and the Dutch Gap Conservation Area have to offer.

Special Events
Volunteer at one or as many events at Henricus as your schedule permits and know that you are brightening the lives of the families who attend.

Volunteer Benefits:
·         Complimentary family admission to the living history museum
·         15% discount in the gift shop
·         Invitation to our special events
·         Opportunity to make new friends and bring history to life for thousands of people each year

For more information about joining the all-volunteer Henricus Militia, please visit this site: http://henricusmilitia.com/
Posted by Henricus Historical Park at 1:22 PM No comments:

Henricus Historical Park was selected as a location for “The Wreck of La Belle,” a film for The Bob Bolluck Texas State History Museum. Filming took place on March 16, 18, 19, 20 and 21. Approximately 50 crew members from Cortina Productions were onsite during this timeframe. Henricus Historical Park honored normal business hours during the filming and all school programs took place as scheduled. This was the fourth movie filmed at Henricus in five years. Most recently, “To Have and To Hold” in 2011 which is scheduled for release next year. Virginia has been increasing incentives for movie productions to bring more jobs to the Commonwealth. Richmond recently served as a location for “Lincoln” which received 12 Oscar nominations. For more information about filming at Henricus, call (804) 748-1611. 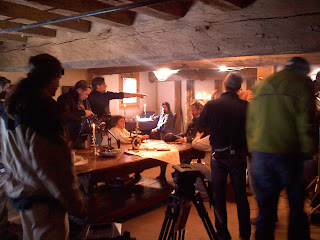 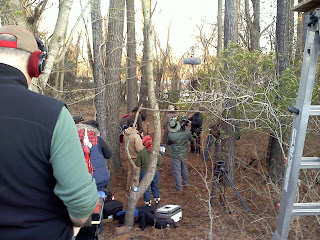 Posted by Henricus Historical Park at 9:06 PM No comments: 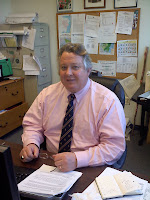 Charles Lewis Grant, executive director of Henricus Historical Park, was recently invited to join the Society of Colonial Wars in the State of Virginia (VASCW). The society was established to recognize the importance of American colonial history, commencing with the settlement of Jamestown on May 13, 1607 and leading up to the Battle of Lexington, April 19, 1775. VASCW was formed to commemorate the events of that colonial period and the military and naval personnel and high civilian officials who assisted in the establishment, defense and preservation of the American colonies and were the founders of this Nation. Significant financial contributions from VASCW have been made towards restoration work at sites such as Jamestown Island, Colonial Williamsburg and Stratford Hall. Annual donations are also made by VASCW to the Henricus Foundation to support education of young people at Henricus Historical Park. Membership in VASCW consists of adult males directly descended from an individual who served in the colonial militia or British army or held high civilian office during the colonial period. For more information about the Society of Colonial Wars in the State of Virginia, visit: www.vascw.org.

Posted by Henricus Historical Park at 2:18 PM No comments:

Founding of Henricus Commemorated During Publick Days on September 15-16 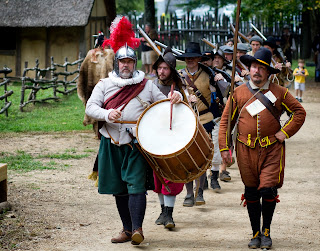 On Friday, September 14, Henricus Historical Park hosted a welcome reception for Publick Days and dedicated the Drumwright Education Fund in honor of recently retired Henrico Deputy County Manager, George T. Drumwright, Jr. The Drumwright Education Fund will enhance the Henricus Foundation’s ability to meet increasing demand from area Title I schools for SOL-aligned education programs. A number of local officials attended the Friday night reception including incoming Henrico County Manager, John A. Vithoulkas; Dorothy A. Jaeckle, Bermuda District Supervisor for Chesterfield County; and former Virginia Lt. Governor, John H. Hager among other dignitaries. On Saturday and Sunday, Henricus Historical Park welcomed several thousand visitors to Publick Days which featured more than 100 living history interpreters representing 1611-1917. Visitors could tour 17th-century ship replica, Phoenix, and participate in history and nature pontoon boat tours of the James River. One visitor was so impressed, that she wrote a kind letter with a $1,000 donation. We are pleased that Henricus Historical Park has become the cultural focal point for our region and was recently voted 2012 "Best Park” by readers of Richmond.com. To learn more, visit www.henricus.org or find us on Facebook and Twitter.

Posted by Henricus Historical Park at 9:03 PM No comments: 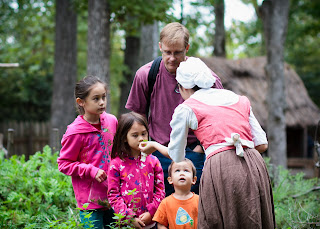 Please join Henricus Historical Park for a complementary Educator Open House on Thursday, August 23 from 1 until 4:30 p.m. Public, private and home school teachers are invited to experience education at Henricus through a variety of hands-on demonstrations including crafts for children. Throughout the year, the living history museum offers multi-curricular, SOL-aligned history, math and science programs for pre-K through grade 12. Topics for upcoming programs include Virginia Indian and Colonial English history, the Civil War, archaeology, 17th-century sciences and the James River, among others. Tours of the historic site will be available and activities will be demonstrated in the classroom. Admission is free and light refreshments will be provided. Immediate family members are welcome to attend. Registration is recommended by contacting Victoria Sweeney in the education department at (804) 318-8797 or sweeneyv@chesterfield.gov.
Posted by Henricus Historical Park at 3:51 PM No comments:

Henricus Historical Park
Chester, Virginia, United States
Commemorating more than 400 years of history, Henricus Historical Park re-creates everyday 17th-century life in the second successful English settlement in North America and in the Virginia Indian site of Arrohateck. Due to its prime location as a military outpost on a bluff overlooking the James River, the site also boasts rich Revolutionary War and Civil War history, which visitors may experience through special events and programs throughout the year. Surrounded by the 810 acre Dutch Gap Conservation Area, the living history museum offers exceptional Pre-K-12 and adult education programs, and both indoor and outdoor meeting and special event space. Henricus Historical Park is a nonprofit 501(c) (3) organization that operates in partnership with the Henricus Foundation and the counties of Chesterfield and Henrico. For more information about Henricus Historical Park visit www.henricus.org and on Facebook, Instagram and Twitter.

Contacts in the New World